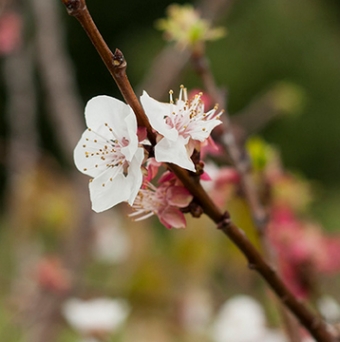 There is no such thing as a bad time to drink wine and Bot River’s Spring Weekend proved the point. With the pink-bunting-festooned Luddite Landrover as chariot and blossoms abounding in orchards and along the roadsides, the annual Spring weekend got underway.

Niels was in the cellar from 10am, offering Genevieve bubbles and a taste of his Shiraz. It might be considered imprudent to begin sipping so early in the day, but luckily Penny’s pork bangers were sizzling, so one could call it breakfast!

At Feiteiras – a family-run vineyard that makes handcrafted wines – José de Andrade offered round his Verdelho. ‘Cooking and winemaking is not a profession in Portugal’, he said, laughing, ‘It’s something we all do’. A Madeiran who settled in Bot River, José stays true to his Portuguese roots, making wine using a basket press.

José doesn’t believe in sterile wine tastings – ‘nobody drinks wine like that in real life!’, and family and staff have rustled up a veritable Portuguese feast. A dry merlot rosé is another perfect accompaniment to the Portuguese feast, followed by a 2011 Troca Tintas. ‘’I could just drink this all day’, murmured a happy guest.

Barton is home to winemaker PJ Geyer, who also happens to be an excellent ‘kettie skiet’ coach, but despite the best post-wine-tasting efforts, the target remained elusive. ‘My heart is Merlot’, he explained. Barton’s Merlot block was what persuaded PJ to settle in Bot River and he reckons that Merlot is the most difficult wine to perfect.

‘Merlot is always feminine’, he chuckles. ‘One mistake, and you’re over. It’s an unforgiving wine’. PJ’s love for winemaking became clear when he described the natural algorithms of wine, and admitted to playing soothing music in the cellar. ‘It’s not about thinking and doing, it’s about tasting and feeling’, he added.

At Rivendell there was an eloquently hosted Sauvignon Blanc vertical tasting (2011, 2012 and 2013 vintages) happening with Rachel, the hostess. A gorgeous rosé – flush in colour and served with a luscious chilli-chocolate-coated strawberry in the vernal sunshine was a favourite.

More treats lay in store at the magnificent Benguela Cove manor house. High tea was served in style after a tasting on the terrace overlooking the estate and lagoon. Scones with real clotted cream and lemon curd, macarons and crustless cucumber sandwiches arrived in tiered glory.

And at Wildekrans, pink-bedecked staff and local musicians got the merry-making underway as the day turned into night. Sipping on MCC under the marquee on the beautiful Wildekrans lawns, locals, winemakers and visitors all converged to wind the Spring day down together.

On Sunday, Elrieda Pillmann opened her home Goedvertrouw. The building is almost 200 years old and the tasting happened in the shade of her garden, which was all a-blossom. Elrieda’s vines are all ‘bostokkies’, which means a low grape yield of extremely flavourful berries.

Elrieda brought out some of her older Sauvignon Blancs (2006 and 2008) for tasting. ‘Some people think I’m mad for having such old [white] wine’, she laughed, ‘but then they just need to try it’. Remarkably, Elrieda doesn’t drink, but her palate is unrivalled.

This year sees Beaumont celebrate its 40th anniversary, so over Spring weekend winemaker Sebastian offered tastings of their older vintages. In the vertical tastings of their Pinotage and Hope Marguerite Chenin some of the vintages went back as far as 1995! Sebastian described the evolution of the farm since his parents’ arrival in Bot River, and family and friends were treated to a banquet lunch in the cellar.

The Bot River wine fraternity is about the individuals who are part of it, their sense of community and their love of this beautiful little town in the Overberg. Whether it’s a state-of-the-art winemaking facility or a small family-run business, winemakers nurture respect for each other. ‘There’s no bullshit here’, says PJ. How right he is.